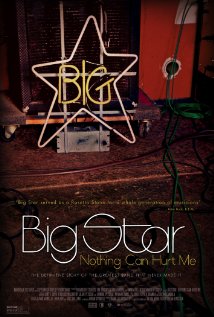 As far as music documentaries go, I’ve seen very few that are better than Big Star: Nothing Can Hurt Me. The band never quite made it during its initial lifetime in the early ’70s, and they lost one of their founders, Chris Bell, in a car crash when he was just 27 and two albums removed from the band. Alex Chilton carried on for their albums Radio City and Third/Sister Lovers and things just got weirder, until total disillusionment with the record industry put Chilton in a position where he wanted to distance himself from his Big Star past and even try his hand at punk and post-punk. It wasn’t until the ’80s, when REM and The Replacements came along touting their music, that Big Star were recognized as more than just a local Memphis band that fizzled out. Chilton reunited with drummer Jody Stephens and two members of the Posies in the early ’90s, and they’d tour as Big Star until Chilton’s death in 2010.

The big takeaway was what a family the creative community in Memphis was at the time of Big Star’s inception. It really was isolated from places like L.A., San Francisco and New York, and the music it incubated was a bit grittier, more out there. Stax Records was indicative of this, and then later Ardent, which became Stax’s rock imprint that would shepherd Big Star before the label went bankrupt.

The film also showed what a major influence Chris Bell had on the band’s formation and how much his musical influence is revered. Interviews with his brother and sister showed how tortured he was, searching through his music and religion and trying to reconcile different parts of himself that didn’t seem compatible. Both he and Chilton were creative geniuses and perfect foils for each other. When Bell’s family talks about reporters coming by to photograph the family home, it’s touching, because Bell never made it to fame in his lifetime.

It’s amazing how much talent the band had, and how well-reviewed they were in all the major music mags, but distribution and poor label management led to their obscurity. At a conference of music journalists in Memphis in the early ’70s, Big Star played as a three-piece after Bell’s departure, and the writers were floored. It seems like at every turn, they were sabotaged, in a way by Chilton’s indifference, but mostly mismanagement. They’re still the ultimate cult band, even with their music influencing hundreds of bands that came after them.