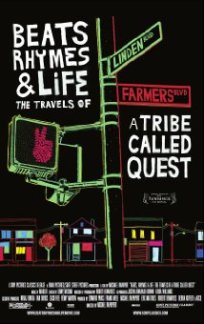 I finally got to watch the Tribe Called Quest documentary, Beats, Rhymes & Life, directed by Michael Rapaport, and it was one of my favorite music documentaries ever. I’m putting it up there with Scorsese’s No Direction Home and Living in the Material World. It’s stayed with me for days and makes me want to revisit the music. Not just Tribe, but all the groups in the Native Tongues.

I grew up with their music, but I really knew nothing about the inner workings of the group. The documentary covers a lot. Q-Tip and Phife get into it over Phife’s diabetes, which leaves him lethargic at certain points in the decade they’re together recording and touring. Their manager calls Tip a wacko at one point and paints him as a mad genius. Jarobi leaves the group but comes on to tour, sort of like Phife’s support system. Ali Shaheed is along for the ride, and he seems most interested in just making music. I felt for Phife, when, after the group ends, he needs a kidney transplant. He finally finds his wife to be a match, and after being estranged, Q-Tip sends him a good luck text that brings out a lot of emotion.

The thing about these guys is they grew up together. They went to school together. They’re like a family, with any family’s ups and downs. The film does a great job of conveying that. And the music. Don’t forget the music is sophisticated and smart and so creative. At one point, Q-Tip talks about his father saying how hip hop was the new be-bop. It’s since morphed into even more than that. But at that time, nobody was taking jazz and making it new like these guys.