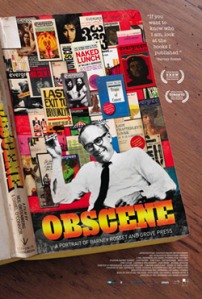 Barney Rosset passed away in February, and this is the definitive biographical documentary on him and Grove Press. I watched it last night, and I learned a lot. I had no idea he was the first to publish Malcolm X and Che Guevara. Or that he had such a propensity for erotica. Or that he produced movies from Sweden. It seems like Grove was at the center of the publishing world in the ’50s and ’60s, and even into the ’70s, and Rosset was larger than life. It struck me how much he smiled and laughed through it all, even when he had to sell off his property to keep things going, and when he eventually lost the press. He seemed pretty youthful even into his 80s. I once corresponded with him, and even though he rejected my writing, he wrote, “Keep going.”