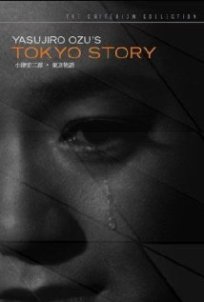 I watched Tokyo Story last night. This film is devastating. It speaks to how busy (and blind) we are in our modern lives…all the way back in 1953. The grown children of the old couple are all too consumed with their own lives to deal with their parents’ visit. Then when their mother is dying and eventually dies, they hardly spend time with her or their father. The only ones who seem kind or fully aware of what’s going on are the daughter-in-law, Noriko (married to their son who died in WWII), and the youngest daughter, Kyoko, who still lives at home. When Kyoko tells Noriko “They’re selfish” after the other siblings have all left their father after the funeral, it crystallizes the whole movie. It’s a slow build to this moment, and it’s so sad, because their mother was so happy earlier to go visit them all in Tokyo and Osaka. Noriko holds a smile throughout, even though she’s still mourning her husband eight years after his death. His parents tell her to marry again. The father speaks about how he can’t expect too much from his children, as if he’s come to accept their selfishness. His wife talks about how their children have changed. Noriko tells Kyoko at the end how life is disappointing, and says it with her sad smile. Just crushing.