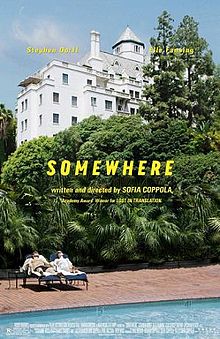 Sofia Coppola’s fourth feature is probably my favorite, though I’ve liked them all. Virgin Suicides is probably next on the list. But anyhow, I watched Somewhere last night, and some have said it’s like an Antonioni or Bertolucci film, with long, moody shots, and only an implied plot, and this is true. Coppola says herself it’s meant to be more like a poem, a portrait of a person, not necessarily narrative-driven. I think it succeeds in this very well. It captures the life of movie star Johnny Marco as he attempts to deal with stardom and its vacuous side in L.A. while simultaneously trying to connect with his daughter Cleo. Stephen Dorff and Elle Fanning are perfect in these roles. I also liked the people cast in supporting spots, like Chris Pontius from Jack-Ass as Marco’s occasional sidekick and the Shannon twins as Marco’s frequent visitors at the Chateau Marmont. I think Coppola took some risks and they all paid off well. Even though the movie is understated, to say the least, her choices of casting and shots held longer than maybe they would have been in a run-of-the-mill picture gave it an undercurrent of absurdity that was not in your face, but still obvious. Sort of like a David Lynch work on valium. It occurred to me that there’s definitely humor in the film, even though Marco is in a state of despair. I think it’s hard to pull off something so understated without boring people, and I wasn’t bored one bit.