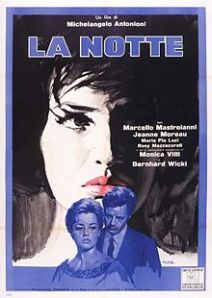 Over the course of a few months, I’ve watched Michelangelo Antonioni’s early ’60s trilogy (L’avventura, La notte and L’eclisse) out of order. Last night I finished with La notte, and it struck me as the best of the three. Marcello Mastroianni seems to anchor it, the way he anchors Fellini’s films. Jeanne Moreau is sullen throughout and also seems to be the darker shade of Mastroianni. She’s the conscience of the couple whose marriage is failing. Monica Vitti is sexy, yet flighty. She doesn’t feel as heavy or as silent as in the other two films in the trilogy. In this one, she is lighter; she is frivolous to a degree. In the others, she seems to sleepwalk or drift methodically. Also, I think La notte has a bit more plot and is framed better than the other two (beginning with the couple’s visit to their dying friend and news of his death in the midst of their flirtations). The note Moreau reads to Mastroianni at the end and his response to it is devastating. So far, this movie is my favorite of Antonioni’s, with Blowup a close second. Red Desert is next on the list.