Lakecia Benjamin’s a fantastic alto player, if you haven’t heard of her. This whole album is Benjamin’s exploration of John and Alice Coltrane’s music, and it delivers the goods. 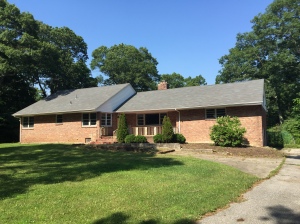 Read this piece about the Long Island house where John Coltrane (who would’ve been 89 yesterday) composed A Love Supreme and lived with his family ’til his death in 1967. The house is being turned into a museum, hopefully set to open in 2017.

…Steve Fulgoni, a local business owner in Dix Hills who is also a voracious jazz fan, broke his way into the house to take a look around. Knowledge of the Coltranes having lived in the area had spread among devotees, but the address wasn’t known, in part because of a misleading mention in a biography. When Fulgoni tracked down an old delivery boy who remembered the jazz legends as neighbors, he found the house as it had been described, simple and unassuming behind a rusting iron gate. To his shock, it was abandoned—an incongruous suburban ruin.

Poet Charles Simic interviews his brother Milan in the New York Review of Books about attending avant-garde jazz shows up until 1965, particularly at the Alphabet City spot Slugs’. Milan’s favorite players at that time: Ornette Coleman and Jackie McLean, both of whom he befriended. He seems to have crossed paths with just about everyone who played modal or free jazz at that time and gives a great oral history of the scene.

In this piece, my favorite quote about Coleman comes from Miles Davis who says: “He just came and fucked up everybody.”

I’ve been listening to a lot of Ornette since he passed, via Columbia’s WKCR jazz show in the evenings. What the Mojo article says about his style being rooted in the blues makes a lot of sense if you’ve ever listened to Robert Johnson, or anyone else really from the Mississippi Delta. It’s all about getting feeling across, and that doesn’t mean necessarily being in tune or adhering to time signatures. It’s all about the individual voice and going wherever the spirit takes you.

But is Coleman listenable? I guess that’s the question. It’s a strange thing that happens. He starts out feeling inaccessible, but the more time you give to him, he starts to penetrate and opens new pathways in the brain. A similar thing might occur the first time you hear Lou Reed or later John Coltrane, I’d say. But Ornette was way farther out than either of them. I can remember listening to Free Jazz and some early Sun Ra around the same period of time, and it was a similar thing going on there, too. Seemingly no rules, no order. But then the brain somehow organizes it and you’re left feeling kind of amazed by it.

My God. I first listened to this when I was 14 and it holds up and will hold up. It’s just an explosion of emotion.